For the final leg of my part in the yacht Quazami with James and the Downes family, sailing from Saint Helena Island to cross the Atlantic, we considered the islands of Fernando de Noronha and the city of Salvador. Fernando de Noronha was the most direct stop-over for the route to the Caribbean but it is not an official port and hence immigration was a concern and we had also heard that the island was expensive for yachts to stay.

Sailing from Saint Helena Island on the February trade winds

We sailed for 12 days to Recife. The 1800 nautical mile leg was the longest we had sailed so far. The wind was very light during the first four days and we probably averaged around 120 miles per day, which was very slow but, with the distance being long, we were hesitant to push the diesel usage early in the trip.

On day five, the trade wind started to blow stronger (8 – 15 knots) and with two spinnakers we are averaging in the region of 6 knots and covering around 180 nautical miles per day. As the wind fluctuated, we would be very assertive in sail changes keeping the boat sailing as fast as possible. On the final 600 miles to Recife, we were graced with much better winds and were logging up to 220 miles on some days.

It is recommended to enter a new port in the daylight, however, we arrived at the entrance of Recife at 3am. With the harbour lights clear and not wanting to sit in open, unfamiliar water, I decided to head straight in. Like the US, Brazil has its incoming port lights on the right and the green starboard lights on the left, but with all this clearly marked out on the Navionics app, we decided to head in.

It had been a long approach as we had to keep our eyes peeled for fishing buoys. As we ventured further down the river the channel become narrower with only red and green poles to mark the channel. This made for an intense final 1.7 miles to Cabanga Marina. Now 4am, we made our way into a tight marina and set ourselves stern on an open walk on mooring.

As the final day loomed it was time to reflect on the journey that we had done. The seven of us had crossed some 3600 nautical miles at sea and to look back at the distance was something we were all very proud of. Mooring lines made, there were hugs all round as we celebrated having completed our voyage.

Life at sea on Quazami

One tends to presume that the days are very lazy and there isn’t much to do while sailing, but it is amazing how many jobs there are always to do on the boat. Basic boat maintenance and repairs followed every day, and new challenges cropped up for us to problem solve. It is a great experience to spend time fixing issues on the boat and before you know it you find yourself with a wealth of experience in ship electrics, plumbing and mechanics. 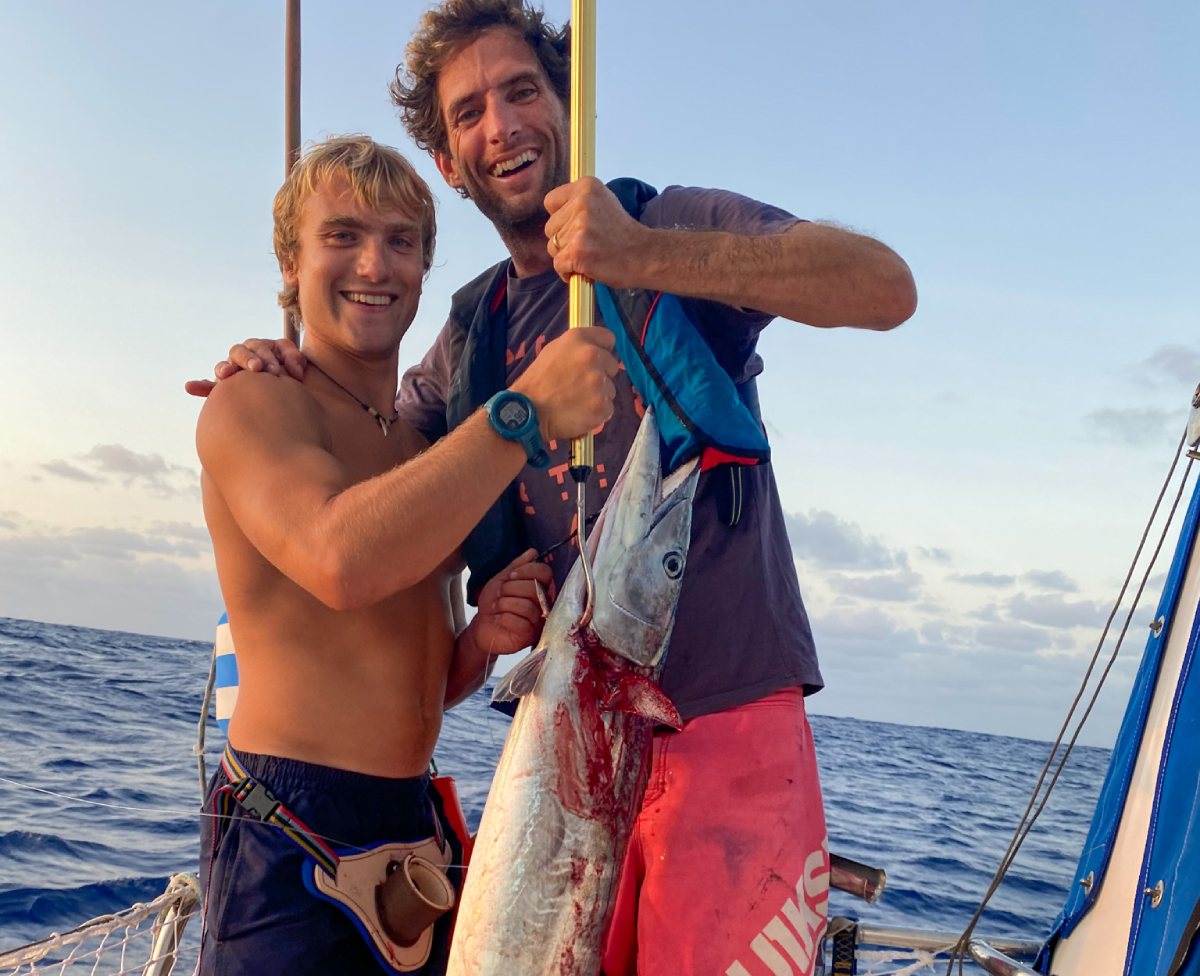 Ant, Julz and James were growing in sailing experience so that by the time we said goodbye in Brazil, they were well-equipped to continue the journey with experience. When the wind was light, Julz and Ant continued to school Emma, Beth and young John. Whereas, when the sea was a little rougher, it was better to take it slower to reduce the effects of sea sickness.

On this leg, we caught a nice 18kg wahoo, 11kg tuna and 22kg dorado. The most fruitful time to catch was always around sunset.

When we arrived on Sunday morning we were confined to the yacht until the club could arrange a rapid Covid test for us on the Monday morning. These results were sent off to the Brazilian administrators, and within 12 hours we were given access to walk around.

In contrast to St Helena, with the help of the marina staff, we were treated to a fast rapid test onboard that then allowed us to enjoy the club facilities. Cabanga Marina has fantastic facilities; it didn’t have a laundry service, however. The internet is fast, food good and the beers cold – what more could you ask for after having been a sea for so long.

Immigration at the police station was a swift affair, although customs did take Ant and Jules a bit longer. This was understandable as Carnival holidays were in motion and some aspects of the admin was running a little slower.

The city of Recife

There are two main areas in Recife. The old town with amazing architecture, traditional restaurants and bars filled with live music, and good cheer, the Brazilian way. Then, on the south side along the beachfront, there are also excellent restaurants that have a modern feel about them.

As it was my first time in Brazil, I can’t compare Recife to other parts of the country. But I found the people very helpful and friendly, and while there is a massive disparity between income groups, they are all near one another. We walked around the city during the night, but decided it was safer to Uber at night.

We didn’t venture off land, as Recife has a hard time with shark attacks, and we were advised not to swim.

After having spent five days in Recife, it was time for us to jump back on Quazami to head northwards some 80 miles to a new anchorage. It was time for me to say goodbye to the team and be re-united with my family at home. Ant, James and Jules were well-prepared to take the yacht further and I flew back to Durban South Africa.

Many thanks to the Downes family for an epic adventure and to James, who was such a great crew member. It was an experience that will stay with me forever!